I've lusted after the Honda CB-1 since they were new ('89-90 -- mine's an '89). The little high-revving 400cc 4-cylinder bike is small and light, handles and brakes well, is a lovely pearl blue, and the styling is very simple and unobtrusive, yet somehow perfect and beautiful (not that I'm biased :-). Think of it as the Lotus Elan of motorcycles (except that it's Honda-reliable -- I hope!)

My take, the first time I rode one, was:

It has the greatest engine sound of any bike ever made -- when you're riding it, it sounds like a GP race a mile away, only you can make the racers go faster or slower, by adjusting the angle of your right wrist.

My fiance, after riding it, said:

If I had an imaginary bike that would do everything right, this is the real incarnation of it. I've been riding it in my mind for so long that when I met it in the flesh, it was like reincarnation or something.

Okay, maybe he was exaggerating a bit. Still, the Little Honda is a neat bike. 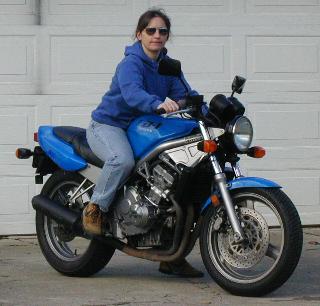 I added a fairing (the EX500 spoiled me), a Rifle Nightflight. The order took forever and I had to make some modifications to the mounting hardware (it didn't just bolt on) but it looks pretty good and the paint is holding up well. Targa used to make the well-regarded Tsunami, but they've stopped making the CB-1 model. I tried a generic "cafe fairing" from a local bike shop, but it didn't fit -- wanted the headlight to be much higher than it is compared to the turn signals and bars.

Though I love the high revving nature of the engine, buzzing at 8k RPM on the freeway got to me, so I installed a 35 tooth rear sprocket (6 teeth fewer than stock, but my 150/60 rear tire is a little smaller than stock, so the net is about 14% higher gearing). I had to take a pair of links off the chain. I still get good acceleration in lower gears and it's still a high-revving bike, but it's a lot more livable on the freeway commuting to work. Gets better mpg, too, though of course the gauges are off now.

It's very cool to have a bike that can take radial tires. They're unbelievably forgiving compared to the bias ply tires I had to run on the EX500.

One quirk about the CB-1: the seat is nearly impossible to remove. After yet another half-hour struggling match with it, I finally wrote down some details that would help me remove it:

The spring latch under the key lock releases a catch that fits into a notch in a post near the back of the seat. So pull the seat straight up (if necessary, pushing a little toward the right side of the bike) to release this post.

Despite the "up" part this is sometimes accomplished by sharply forcing the middle of the seat down and back. (Maybe the seat flexes so the front part can go up at the same time.)

Alternately, sometimes it works to grasp the back of the seat with one hand, the front with the other, and apply upward pressure on both ends while also pushing toward the back of the bike.

(I had more, but lots of them are no longer there.)

My previous street bike was an '88 Kawasaki EX500, which I raced a few times in the AFM several years ago but don't race any more. (To prospective buyers: no, it was never crashed or abused on the racetrack.)

I wrote an article on modifications I've tried to the EX500 -- what worked, what didn't.

Before I got the EX500, I had an RD400. I never managed to keep it running for long enough to learn much about riding, though. A theoretically cool bike that didn't work out too well in practice.

Dirt biking: I tried a '82 XR200R as my first dirt bike, but I didn't get along with it very well. Lots of people like them, but it didn't suit my size or style, so I started hunting for something smaller, lighter, and quicker.

Here's a short article I wrote on my search for the perfect small dirt bike. 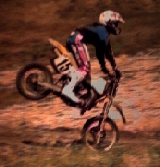 One cool thing about an 80cc bike is that I can take it on the mini track, a great place for a novice rider to practice jumping. Here's me almost doing a faceplant on the Metcalf mini track (that's also where the previous picture was taken) while I try to figure out how to control the attitude of the bike in a jump:

Links to other motorcycle-related sites:

(Probably way out of date!)

Motorcycles and Gear for Sale