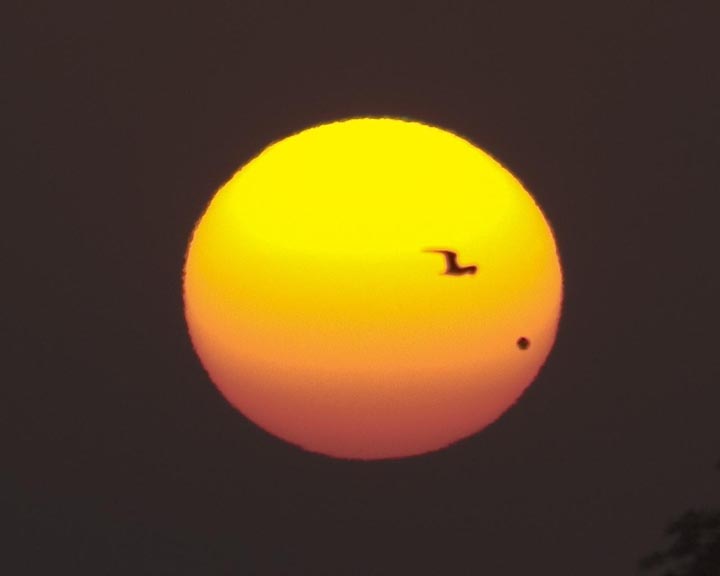 June 5 brings the last Venus transit until 2117, when Venus will pass across the face of the sun -- the second of the only two Venus transits any of us will see in our lives. (The first, pictured in this lovely image from Bill Arnett, was in 2004, visible on the east coast of the US but not visible here in California.)

Venus is just a small spot against the vastness of the sun -- the skies won't dim like in an eclipse, and you need equipment to see it. So why should a non-astronomer care?

Mostly because it's so rare. Venus transits happen in pairs with more than a century between successive pairs: the last transit before 2004 was in 1882, and the next one after this week's won't happen until 2117. The entire 20th century passed without a single Venus transit.

They're historically interesting, too. It was in 1663 that Scottish mathematician James Gregory proposed that you could calculate the distance to the Sun by measuring a Venus transit, by observing at many different places on earth and measuring parallax. Edmund Halley (of Halley's Comet fame) tried this method during the Mercury transit of 1676, but since Mercury is so much closer to the sun and farther from us, the results weren't good enough. Unfortunately, Halley died in 1742, too early for the Venus transit of 1761.

But lots of other astronomers were ready, mounting expeditions that year to Siberia, Norway, Newfoundland and Madagascar (some of these expeditions were major adventures, and several books have been written about them). They followed up in 1769 with expeditions to Hudson Bay, Baja California, Norway, St Petersburg, Philadelphia... and the first voyage of Captain Cook to Tahiti, where they observed the transit at a location that's still called "Point Venus" today.

Alas, their measurements weren't as accurate as they had hoped. The exact times of a Venus transit turn out to be difficult to measure due to the dreaded black drop effect, where the black circle of Venus can seem to elongate into a teardrop shape as it "tears away" from the edge of the sun. The effect seems to be caused by blurring from our own atmosphere (poor seeing) combined with telescope diffraction. So the steadier your seeing is, and the bigger and better your optics, the less likely you are to see the black drop.

How to see the transit

First, if you don't have a telescope of your own, don't despair -- head to your local astronomy club. Here in the bay area there are dozens of clubs, and just about all of them have public star parties planned for the Venus transit. There are events planned at local science museums, planetaria and schools as well. A few bay area links: San Jose Astronomical Association, Peninsula Astronomical Society, San Francisco Sidewalk Astronomers, San Francisco Amateur Astronomers, or any of the others on the AANC's list of Amateur Astronomy Clubs in Northern California or the SF Chronicle's list of astronomy clubs. And the Hubble Space Telescope will be watching the transit by looking at light reflected off the moon.

But suppose you're viewing it on your own?

Of course, this being a solar event, you can't look at it directly -- you need a filter or other apparatus. No need for a fancy H-alpha filter -- a white light solar filter is fine, the kind that covers the aperture of the telescope. (Don't use the kind that screw into the eyepiece! They can overheat and crack while you're looking through them.)

You don't need a big telescope. I used an Orion solar filter on my little 80mm f/7 refractor for the last Mercury transit and it worked great. And Venus is much larger than Mercury, at about 50 arcseconds versus Mercury's 12 (the sun is half a degree, or 30 arcminutes). So if you've seen a Mercury transit, you can imagine how much easier and more spectacular a Venus transit can be.

If you use binoculars, either make sure that you have solar filters for both sides, or keep one side covered at all times. If your telescope has a finderscope, keep it covered.

If you can't find a solar filter in time for the transit, you can set up your telescope to project the sun's image onto a white board or sheet of paper. (This is how Jeremiah Horrocks made the first known Venus transit observation.)

Use a cheap, low powered eyepiece for this: the eyepiece will get hot, and you don't want to risk damaging a fancy eyepiece. Be careful with solar projection -- make sure nobody nearby can walk between the telescope and the surface you're using as a projection screen, or place their hands or eyes in the light path. A web search for solar projection will uncover other tips.

You can project the sun's image with binoculars, too, so don't feel left out if you don't have a telescope. You'll definitely want a tripod mount. I tried binocular projection during last month's annular eclipse, and found it very fiddly to hold the binoculars just right. Don't count on being able to hold them steady while also looking for Venus on the projected image. If you don't have a tripod adapter (try Orion), cobble something together with duct tape and a block of wood, or whatever you have handy.

And do try to get a good white surface to project onto. Concrete worked well enough for the solar eclipse, but you'll want better resolution for Venus.

When does this all happen?

Seen from the bay area, Venus begins its ingress onto the disc of the sun on 3:06 PDT on the afternoon of June 5. The transit continues until after the sun sets at 8:26. So we won't get to see egress. Venus's exit from the face of the sun, but it's the mirror image of what we'll see at ingress.

And if you have a good telescope and filter and you're blessed with especially good seeing around the time of second contact, try looking for the aureole, an arc of light just outside of the solar disk made by the refraction of sunlight through Venus's atmosphere. Amazingly, the aureole has the same surface brightness as the sun's surface, and is said to be possible to see even through a solar filter. That's something you'll never see in a Mercury transit! (Follow the link on the image to see Lorenzo Comolli's amazing aureole photo in more detail, along with other great aureole images courtesy of the VT-2004 programme.)

Here's the time table for the bay area (from the table on NASA's eclipse website):

At first contact, the sun will still be high for bay area observers, 60° up. By maximum transit the pair will have sunk to 21°, still plenty high enough to see the spectacle. Photographers will want to wait around for sunset for a chance at some spectacular photos, like the Bill Arnett photo at the top of this article, taken from Chicago.

Want more details or times from other locations? transitofvenus.org has plenty of links, as does Everything you need to know about next week’s Transit of Venus.