Places to Paddle in the San Francisco Bay Area

Ever since Dave and I got our kayaks, we've been seeing places to go which don't require six hours (round trip) of driving and which don't require a shuttle. We like waves and small rapids, and we also like the idea of paddling upstream when possible, not just floating downstream. It's nice to have your fun and get a workout at the same time, no?

First, calm water. Just about all the county park reservoirs allow kayaking, for a fee (at some, the fee is unreasonable; they charge by the boat, so two people in single kayaks pay twice as much as a huge motorboat with fifteen beer-can-throwing stereo playing partiers. Do I have a bad attitude about this? Yes, I do. In any case, the huge motorboat lakes, like lower Anderson, lower Coyote, and the reservoirs around Almaden tend to be boring for kayaks, except for dodging motorboats, which can actually be fun if you're prepared for it and want to surf their wake.

Good local paddling reservoirs include Stevens Creek, Lexington, upper Anderson, del Valle (which has rentals if you don't have your own boat), and Chabot (another rental spot, but not quite as interesting). Smaller reservoirs, fun for a short trip but arguably not worth the admission price, include the Los Gatos perc ponds and Vasona. They're great low-key places to get started or just enjoy watching the scenery and the birds.

For less calm water: Turns out there aren't many guidebooks or web sites on this sort of paddling. California Creekin' is an awesome reference, but doesn't cover the piddly little streams in the bay area itself. However, BRT Insights - Whitewater Kayaking has a great page summarizing San Francisco Bay Area Creeks & Rivers (there's also lots of other good information on California kayaking on the site)..

(I recently stumbled across a couple of interesting pages on kayaking the San Lorenzo river in Santa Cruz on the Santa Cruz kayak club site: one includes several stories while the other discusses the fight against the city of Santa Cruz' unreasonable boating ban.

Much of this current page is excerpted from a posting I made to rec.boats.paddle.touring on 2/4/2000.

There are lots of good reservoirs here in the South Bay (though they're all fairly low right now), but not much in the way of moving water.

Except the bay, of course. There are lots of sloughs around Palo Alto and on up the peninsula which are nice paddles and a chance to play in mild surf. Coyote Point has a nice mix -- some interesting rocks to look at and a bit of surf in the afternoon when the wind comes up. Palo Alto Baylands has calmer water and a lot more bird life to watch.

In downtown San Jose (I think it was on West San Carlos just west of downtown) there's a building that has the oddest thing painted on the side:

and a phone number. We called the phone number, but they're apparently long out of business. But it got us to thinking, because the Guadalupe is deep enough to paddle most of the year. Imagine a paddle trip through downtown San Jose. :-) We're going to try it in the spring when the rains have built up the river a bit more. The Guadalupe ends at Alviso, but that end doesn't look like a very interesting paddle -- a long straight section with high reeds on either side and not much in the way of birds or scenery, for a long way.

Coyote Creek looks like a wonderful paddle for most of its length. Unfortunately, it doesn't seem to be legal in the most interesting sections, along the Los Gatos Creek Trail; at least, we haven't found a place to put in that isn't plastered with KEEP OUT signs. 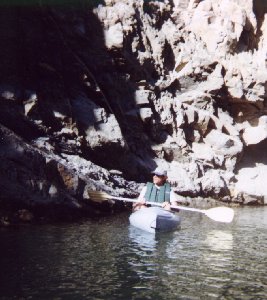 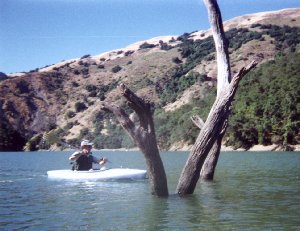 The upper end of Anderson Lake also has a nice creek (Coyote Creek) as its inlet. Take E. Dunne east toward Henry Coe, until you get to the bridge, then start looking for a parking area on the left. if you paddle upstream away from the lake (under the bridge, there's a tremendous rocky gorge, and after that it gets narrower and shallower pretty quickly (so you quickly get away from the motorboats which rule the rest of Anderson Lake) and if you're willing to portage now and then you can go some distance. Looks like it might be fun in the spring (right now you can't get very far, water level too low).

I've driven along the Pajaro for some distance heading toward Elkhorn Slough, and it looked great and I've wanted to go back and see if there's a place to put in. (It looked like you couldn't get there just by paddling upstream from the Slough.)

I hear there used to be an annual float race down the Napa, where people would float all sorts of things, inner tubes, bathtub toys, inflatable love dolls ... sort of an aquatic equivalent of the Bay to Breakers run. I don't think it happens any more, though. 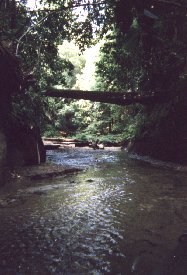 In the Santa Cruz Mountains, there's a hidden gem of a reservoir called Loch Lomond (which unfortunately is closed during the winter, so you'll have to wait a few months). It looks relatively dull from the dock, and you wonder whether it was worth the launch fee, but take my advice and go right from the dock and paddle upstream away from the dam, and eventually you get to the feeder creek (I've forgotten the name), which passes through an amazing fern-overgrown tunnel where the water is just barely deep enough to float a kayak (in fall, I'm looking forward to seeing it in spring), gliding over the tracks of the Great Blue Heron who hunts there.

Stevens Creek reservoir (Cupertino) also looks like at the end of the rainy season it might occasionally get high enough to float a little way up Stevens Creek, at least under the bridge and a little way past. There are lots of birds and fish in this reservoir, and trees to weave in and out of if you're into that (hey, can I get between those two trees without touching anything? Now can I do it backward?) See the picture above of Dave doing a tree slalom at Upper Anderson.

Lake Tahoe has some nice spots, though it's kind of a hassle to get to. Back to Akkana's Kayak Page
Back to Shallowsky.com
mail comments