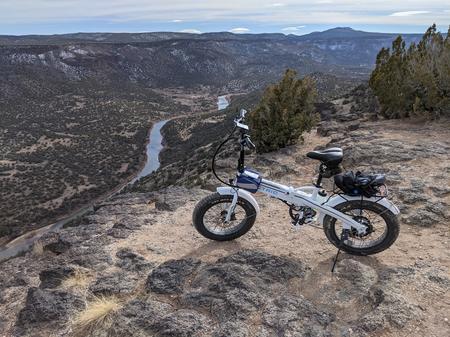 One goal was to help us get into the back country. There are several remote places -- most notably, in Canyonlands' Needles and Maze districts -- that can only be accessed through trails that are beyond our Rav4's ability. Or at least beyond our risk tolerance. For some such spots, we've used regular mountain bikes; but we're not bike campers or backpackers, and there are some spots we'd love to visit that are beyond our range for a single day's mountain bike ride. A slight boost in power and speed might bring some of these places into our reach.

That requires getting the bike to the trailhead, though. One problem when traveling with mountain bikes is security: a bike on a rack is highly vulnerable to theft (I lost a beloved, heavily customized Cannondale that way once), and a lot of motels have rules against bringing bikes into rooms.

Dave's solution? Folding bikes that could fit in the back of the Rav4.

An e-bike also sounded like a good idea for running errands. Dave has a Kawasaki Z125 motorcycle for trips to the market, post office and library. The Z125 is the world's cutest miniature sportbike, and it's fun to ride. But an e-bike would fill the same niche without the pollution of an internal combustion engine.

E-bikes are all over the map in features, power, range on a charge, and price. I was surprised to learn that most electric bikes don't regenerate when braking or going downhill, like electric cars do. Apparently it's hard to regenerate when using a crank or hub motor with a freewheel.

I wasn't totally sold. Partly that was because most e-bikes are so heavy, the polar opposite of my beloved Cannondale. I'm also leery of buying a bike without a test-ride, because most bikes don't fit short people well.

But last November, Dave announced that he had a Lectric XP on the way, his pick for the best folding e-bike combination of range, power, and price. 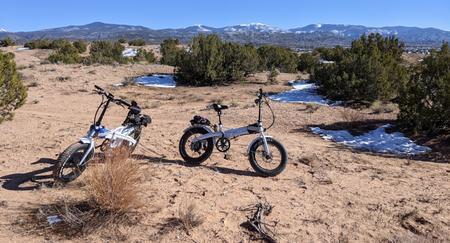 Once out of the box, the XP didn't need much assembly. Unfolding and putting the handlebar and seat in place took maybe half a minute, including figuring out how it all worked. The battery needed a few hours to charge, and then Dave was off pedaling around the neighborhood. He came back with a big grin on his face.

Eventually it was my turn. Would it fit? Lectric's website lists the XP as fitting people down to 5'3", an inch taller than me, while the XP Stepthrough is good down to 4'10". Would I have to settle for a Stepthrough?

I needn't have worried. I slid the seat down -- there's plenty of adjustment, it'll go much lower than I needed -- and I was off. You can also adjust handlebar height, but I didn't need that; even though the reach from the seat to the bars is the dimension I have the most trouble with on regular bikes, on XP has a fairly upright riding position and the reach to the bars isn't a problem for me. (The new XP 2 now says it's good for heights 5'0 - 6'4.)

I rode a little test loop, up and down the street and then off onto an easy trail. The Lectric did fine, and it was so much fun that I ordered one that evening.

My Lectric took a few weeks to arrive. That's fine -- the Lectric website was clear that they were back-ordered so I expected a wait. 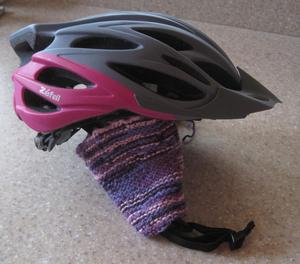 The wait gave me time to knit a couple of ear-warmers to fit over my bike helmet straps. Riding in New Mexico is surprisingly pleasant even in December if you have adequate cover for ears and fingers.

I had to contact Lectric about a couple of minor problems with the shipment. Nothing bad that kept me from enjoying the bike, just things like a cracked instrument bracket and a different seat from the one I'd ordered. The company was wonderful to deal with: everybody I talked to was super friendly and responsive. 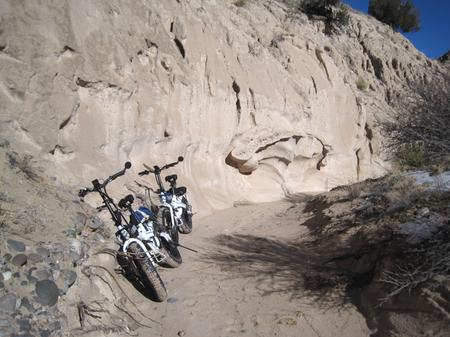 The Lectric is a riot to ride. It's bouncy because of weight and the lack of suspension (the new model adds a front suspension fork), but between the big balloon tires and the power assist, you can bounce right over rocks and roots and snow and deep sand that would have stopped me for sure on a regular mountain bike. Plus there's that Turbo button that magically makes you feel like Lance Armstrong.

The big surprise is how much the motor helps on technical trails. You know those steep rocky uphills where you just can't pedal smoothly enough to get over the rocks? No problem with the Lectric. Even if you enter in the wrong gear or the wrong power setting, you can always use the throttle to power up and over the obstacle. Assuming you remember in time, which does takes some practice.

Using the throttle makes things so easy it feels like cheating, and I try to stick to pedaling and stay off the throttle when I can. But I don't mind using it to get started on steep uphills.

I also had to learn not to blip the throttle accidentally while walking the bike over obstacles, or the Lectric leaps forward like a spirited horse. Speaking of which, the bike has a "walk mode" where it notices that you're gently pushing the bike and gives you a little power assist. A host of nifty Ffeatures like this are explained in an excellent, well written and comprehensive manual.

The Lectric has five power level settings, though I seldom go over PAS (power assist) 3 on roads and mostly stick to PAS 1 on trails. But PAS 4 came in handy earlier today when I was trying to race home ahead of a rainstorm.

That's one of the great advantages of an e-bike compared to a normal bike: if you suddenly need to hurry somewhere, or you find yourself facing a big hill or a headwind you weren't prepared for, or you're just exhausted after a long ride, you can always bump up the power level. It's also a great equalizer between riders: if you fall behind, flicking the button to the next power level will let you catch up quickly.

We haven't gone on any really long rides yet, so we haven't pushed its battery range. Of course, range is highly dependent on how much you pedal and how hilly the terrain is. Lectric says a full charge will give you 20 miles on level ground using just throttle, no pedals. Dave got 47 miles out of his Lectric, off-roading around hilly White Rock over several days using mostly PAS 1, and had about 30% of the battery left. 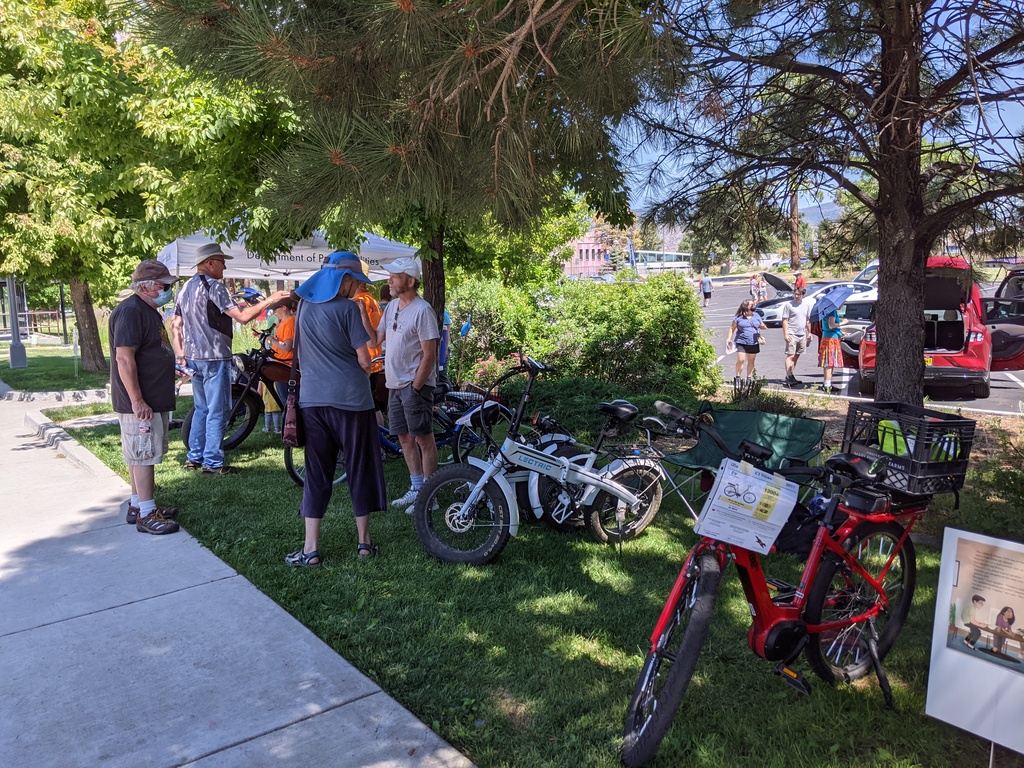 I find Lectric's standard seat surprisingly comfortable. Initially my bike came with the optional "Giant Seat", which for me was much less comfortable (and not what I'd ordered), but Lectric was happy to swap it for the standard seat.

The stock freewheel isn't geared low enough for off-road trails, at least if you want to pedal up hills rather than use the throttle. Following advice on e-bike forums, we've replaced our stock freewheels with an 11-34T freewheel, which makes a big difference. (Dave thinks the new models may be shipping with an 11-34, but I can't find any confirmation of that on the website.) YouTuber Jerome's Lectric XP Mods goes into detail about how to install the freewheel (we had to buy a freewheel removal tool), and about other useful XP accessories. 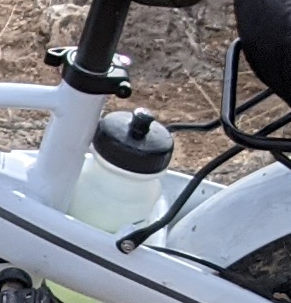 I haven't found a good way of fitting a water bottle cage, but there's an opening at the top of the seat stays where a standard water bottle wedges in just fine. For a more intense ride where I need to be drinking while riding, I use a Camelbak.

Dave switched to a Suntour NCX seatpost, which is a little nicer than Lectric's suspension seatpost and helps make up for the jarring when riding over poorly-maintained streets, so I followed suit. 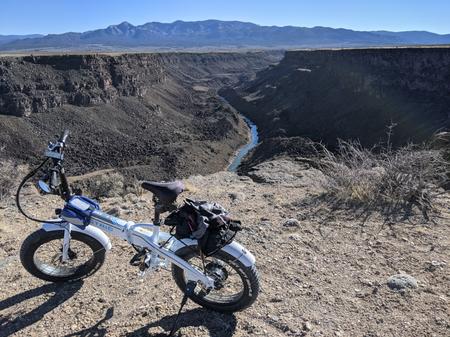 The optional rear saddlebag is handy for grocery-getting, but it took a few tries to get it mounted sufficiently rearward that I didn't brush my heels against it while pedaling. We also added mirrors since we use them a lot for pedaling around the local roads. They come with a built-in headlights, but we don't do much night riding so I can't report on how good the light is.

Folding and unfolding, loading and unloading are much easier with two people. I doubt I could lift the large, awkward 60 lb package into the Rav4 by myself. They do both fit nicely in the Rav4 once we figured out the arrangement, with one bike forward, one backward and the pedals just so.

We've put a few hundred miles on the Lectrics so far and we're having a blast. We do a lot more of our grocery-getting and other errands on the bikes now, and finding excuses to go for rides "just 'cause". It might be a while before we get to Canyonlands; but even without that, they were definitely a worthwhile purchase. So much fun!