I first got into R/C flying in the 1980s. Back then, model planes were made of balsa wood. They took forever to build. The planes were heavy (five or six pounds) and flew fast, and so when they crashed — which they did a LOT — you had a lot of fastidious rebuilding to do.

They were powered with internal combustion 2-stroke motors. They were SO LOUD. You couldn't fly them in local parks; you had to drive to a remote flying field where the noise wouldn't disturb anyone.

Plus the motors were finicky and messy: they spewed oil everywhere, so you had to clean the plane off with paper towels and a degreaser after every flight. Ick.

I got out of flying after a while. But as electric planes became more available, they started allowing flying at some local parks, including one where I hiked a lot. I used to watch the planes wistfully and think about getting back into the hobby. Eventually I found my way to a local hobby shop. And I learned that things had changed a lot. The new planes were mostly made of styrofoam, so there was a lot less assembly to do before you could fly. And if you crashed, they were a lot easier to glue back together.

(Unfortunately, crashing a lot was one thing that hadn't changed.)

The new foam planes were smaller, lighter — but most of all, I liked the quiet of the electric motors. That was more like it! I bought a Pico Stick, an ultralight (5 oz), slow-flying plane made of a stick of pine with wings made of curved sheets of foam. I put it together in an evening and was ready to fly the next day. And of course Dave wanted to try it. 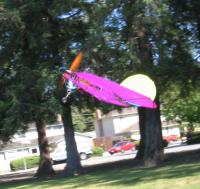 Eventually we assembled quite a menagerie of planes, some quite weird, Like Dave's clowfish, or my IFO (Indoor Flying Object, though I mostly flew it outdoors) made of a piece of ripstop nylon glued over a bent carbon fiber rod. It weighed almost nothing, was almost silent, and flew great.

That was more than a decade ago, and progress hasn't stopped. Planes today are much more powerful (mostly due to lithium polymer batteries) and capable, and the radio gear has gotten a lot more reliable. It's a motor glider: you use the motor to get you up high, then you turn off the motor, the propeller folds back, and you can glide around looking for thermals. It's super light, weighing only a few ounces, with a 28-inch wingspan. It flies really slowly and looks so graceful in the air, and it's super relaxing to fly. When I fly it, I always think, Ahhhh, this is my favorite plane.

As recently as 10 years ago, there's no way you could have flown something this small outdoors: the slightest breath of wind would blow it all over the place. But just in the last few years, electronic stabilization systems make it easy to fly these super-lightweight planes outdoors.

Alphabet soup: the plane is technically a UMX (ultra-micro) Radian with AS3X (E-Flite's name for their proprietary stabilization system). Dave and I have several other UMX/AS3X planes. The UMX Timber (center) is a great beginner: several people at our flying field have used them as first trainers, and Dave got one for practicing takeoffs and landings on a baseball diamond. (Most of our planes don't have wheels and can't take off from the ground: since we fly mostly on a grass field, wheels just get in the way and add weight. But it's fun to practice touch-and-goes now and then.) The UMX Radian comes with floats that work well as skis when there's snow on the ground.

Dave has a UMX Waco biplane (at the top in the image; it's fun and pretty in the air) and a UMX Gee Bee (tricky to fly and ugly-cute).

I have a UMX Pitts biplane (bottom). The Pitts has always been my favorite full-sized plane, and the UMX Pitts is a fantastic flyer: super aerobatic, yet it doesn't have bad habits like tip-stalling. When I fly the Pitts, I think, this is so much fun! This is definitely my favorite plane. 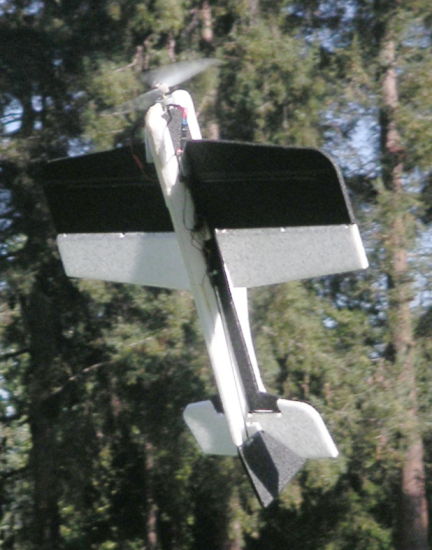 Here's a plane that's just made of sheets of foam with carbon fiber rods to stiffen it. A friend came up with the design and sent two kits for evaluation: one with white foam and one with black. We did mix-n-match: I got the one with white wings and a black body, while Dave's (pictured here) had black wings and a white body. We call them Skunk planes.

The skunk is all floppy and soft and you wouldn't think it would fly, but actually they're amazing. I can do practically anything aerobatic with it and it hardly ever crashes. It has plenty of power and huge control surfaces, so it can do what's called "3-D flying", a stupid name for a fun flying style that includes hovering in place, plus showy maneuvers like lomcevaks. The brushless motor is also really quiet, so I can fly it anywhere without bothering anyone. The Skunk has been my favorite plane for many years.

I have some bigger planes too, like the Saber. It looks very different from the Skunk, and it's much larger, but it's another "3-D" flyer, very light for its size, with a powerful motor and huge control surfaces so it can hover or do insane aerobatics. When I fly it, I think, this might just be my new favorite plane. 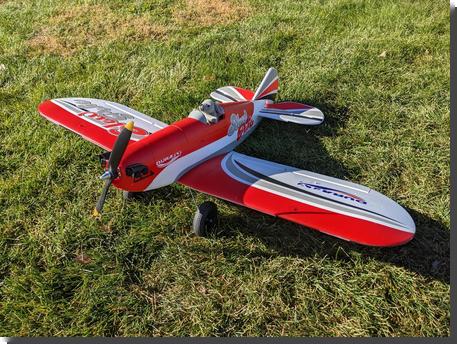 My biggest, and newest, plane is called a Slow Poke.

The goal was to find something that could take off from the grass soccer field at Overlook. That meant something with big balloon tires. Dave and I each ordered one.

It's certainly the biggest plane I have, and the heaviest: almost a 4-foot wingspan, and a bit over 3 lbs. Usually I prefer smaller, lighter planes ... but the Slow Poke turned out to be a spectacularly good flyer. It can indeed take off, land, and even taxi on grass, so we've been having fun with touch-and-goes. But it really shines when in the air: it's a graceful flyer and fully aerobatic. In fact, it does some maneuvers, like Immelmans and lazy-eights, better than any of the mid-wing aerobats I've flown, and it's even good at knife edge flying and lomcevaks. 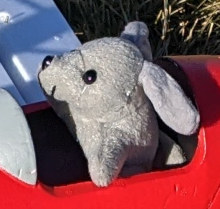 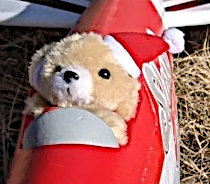 I didn't much like the pilot that comes with the Slow Poke. Fortunately, he's removable. I replaced him with a puppy whose ears blow in the wind, and Dave found a bear with a Santa hat for his Slow Poke.

The Slow Poke is definitely my new favorite plane. 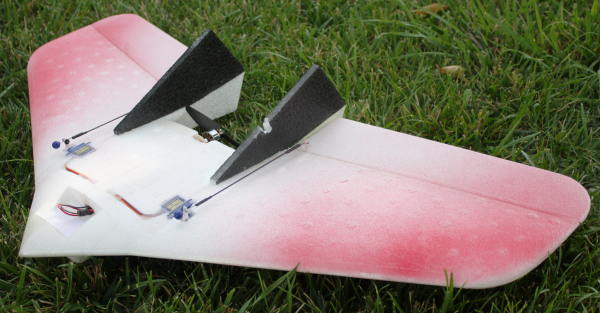 You wouldn't think something like this could fly, would you? It doesn't even have a tail! But it's super agile in the air, doing loops and rolls and inverted flying, and it's beautiful to watch. But what it's really for is dogfighting. We get a bunch of wings in the air at the same time and try to hit each other. Since the propeller is in the back, they mostly just hit foam-to-foam and bounce off of each other.

Here are some videos of a bunch of combat wings dogfighting.

About half the time when two wings collide, both of them keep flying. But even if they don't, combat wings are nearly indestructable: you can crash it hard into the ground, and even if something breaks, you just glue it back and you're ready to fight again. (You can see some battle scars in the photo above, and more on my combat wing page.)

The more wings you can get in the air at once, the more fun it is. Right now we only have four people flying combat at Overlook, but I hope we'll continue to get more addicparticipants as other people see how much fun we're having.

As you see, I have a lot of favorite planes. There's such a variety available, and they fly so differently, that what's best depends on your mood. Most often, my favorite plane is ... the one I'm flying when you ask me.