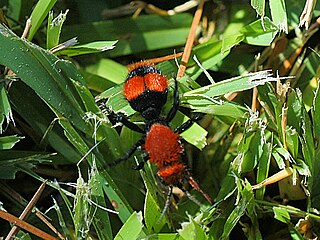 Only the females have stingers — one of the longest stingers, relative to body size, in the insect world. But the females are what we typically see, as they wander around looking for a good nesting site. Males have wings, no stingers, and are much less likely to be seen.

A month or two after I got the request, Dave spotted a red velvet ant in our driveway. I ran inside to grab a container, and we caught it the same way we typically catch insects inside the house to escort them outside (yes, we're big softies).

Unfortunately, it was evening, so the ant would have to survive until morning when I could take her up the Nature Center. I transferred her into the biggest jar I could find, hoping it was big enough to hold enough air to last the night. (This was an alternative to punching air holes and risk a letting "cow killer" escape inside the house.) I added some dirt and rocks in case she wanted a hiding place. A little web searching revealed that some people keep these stinging insects as pets, and that they mostly eat nectar but some people like feeding them pieces of fresh fruit, so I added half a cherry.

She was still moving in the morning (I saw no sign that she had touched the cherry or done anything to make a hiding place), but by the time we got to the Nature Center, she wasn't moving. I hoped I hadn't killed her. But Jenni assured me they were tough and she was probably fine, and indeed, she perked up when transferred into the larger terrarium.

Meanwhile, Jenni pointed out another interesting denizen of the terrarium. There were several darkling beetles sharing living space with the velvet ants, but one of them was apparently dead, sprawled on its back. But no, it wasn't dead. It was a death-feigning beetle, Asbolus verrucosus, a type of darkling beetle which, when threatened, flips over onto its back and plays dead. What an interesting insect! 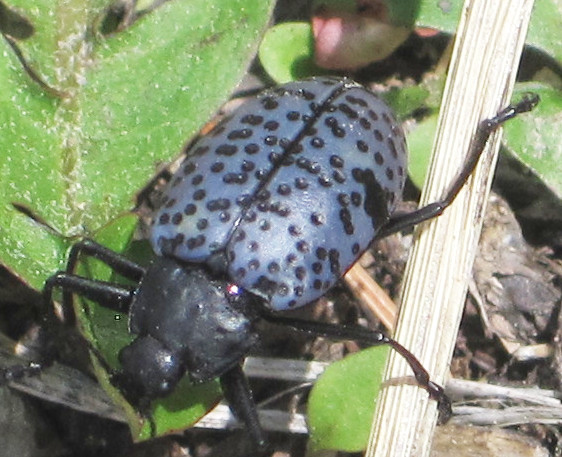 And rather pretty, too. The one in the terrarium was black like most darkling beetles, but they vary quite a bit in color: A. verrucosus accumulates a waxy substance on its shell that makes it look more blue-white, even though the shell underneath is still dark. Individuals with a lot of waxy buildup (above, image from Greg5030) can look almost as blue as a pleasing fungus beetle (Gibbifer californicus), a very attractive (and yes, pleasing) beetle we sometimes see in the forests of the Jemez (I photographed the one at right on the trails at the Pajarito ski area).