A Brood of Small Cicadas

Our trees in La Senda have been ticking madly for about a week.

The noise had been worrying me. Some of our drought-stressed piñons might not have enough sap to fight off bark beetles (we lost four trees last year to the beetles). On the other hand, cicadas do make clicking noises (like an orchestra tuning up, preparing for the symphony). And the ticking noise came from junipers as much as piñons; bark beetles are usually species-specific.. 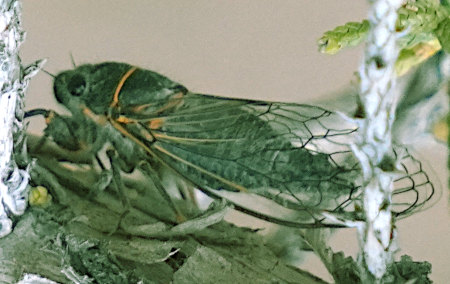 But eventually we were able to find a few of the tickers and photograph them. Definitely cicadas, though they're noticeably smaller than the big broods of 2014 and 2019, and greener, with bigger eyes (here's a 2019 cicada for comparison).

It's remarkably hard to locate cicadas to photograph them, even when you're surrounded by junipers that each have several of them clicking loudly. Once you see them, you can see the movement as they make their ticking noises, and as they slowly work their way along a branch. (The photo here is upside down: the cicada was actually hanging from the branch, but it's easier to see detail when it's flipped upright.)

For a few days around the weekend, they were occasionally transitioning from ticking to a full-blown buzz for a minute or two, but now they're back to ticking. Possibly there aren't enough of them to achieve Full Buzz?

I'd like to know more about the local cicadas. What species do we have in northern New Mexico, and how can they be identified? What are their periods? Do any critters eat them? We never see birds going after cicadas; you'd think this would be a wonderful feast, at least for big birds like crows and ravens. Maybe cicadas taste bad.

NM Game and Fish says there are "more than seven species of cicada are found in New Mexico", but lists only two, neither of them occurring north of Albuquerque. Most references online confine themselves to the big east-coast cicada broods. But I found a scientific paper, Biogeography of the Cicadas (Hemiptera: Cicadidae) of North America, North of Mexico. It has maps but no photos, so correlating the species that have been found here with photos found elsewhere is going to be a bigger research project. I'll write a separate article if I figure anything out.

I'm pretty sure that the cicadas we saw in 2014 and 2019 were the same brood. They looked similar (though I have no good photos from 2014), and the intensity of the sound was the same — for a week or two, they were everywhere, and the buzzing sound was intense and pervasive. But I don't have photos from other years when we've heard smaller cicada outbreaks, so I don't know if these 2022 cicadas correspond to anything I've seen before. From now on, I intend to go cicada hunting any time I hear them, and try to get a record of what each year's cicadas look like. Just call me Dances With Cicadas.