Dave and I are giving a planetarium show at PEEC tonight on the analemma.

I've been interested in the analemma for years and have written about it before, here on the blog and in the SJAA Ephemeris. But there were a lot of things I still didn't understand as well as I liked. When we signed up three months ago to give this talk, I had plenty of lead time to do more investigating, uncovering lots of interesting details regarding the analemmas of other planets, the contributions of the two factors that go into the Equation of Time, why some analemmas are figure-8s while some aren't, and the supposed "moon analemmas" that have appeared on the Astronomy Picture of the Day. I added some new features to the analemma script I'd written years ago as well as corresponding with an expert who'd written some great Equation of Time code for all the planets. It's been fun.

I'll write about some of what I learned when I get a chance, but meanwhile, people in the Los Alamos area can hear all about it tonight, at our PEEC show: The Analemma Dilemma, 7 pm tonight, Friday Feb 23, at the Nature Center, admission $6/adult, $4/child. My SJAA planet-observing column for January is about the Analemma and the Equation of Time.

The analemma is that funny figure-eight you see on world globes in the middle of the Pacific Ocean. Its shape is the shape traced out by the sun in the sky, if you mark its position at precisely the same time of day over the course of an entire year.

The equation of time describes how the sun moves relatively faster or slower at different times of year. It, too, has two components: it's the sum of two sine waves, one representing how the earth speeds up and slows down as it moves in its elliptical orbit, the other a function the tilt (or "obliquity") of the earth's axis compared to its orbital plane, the ecliptic. 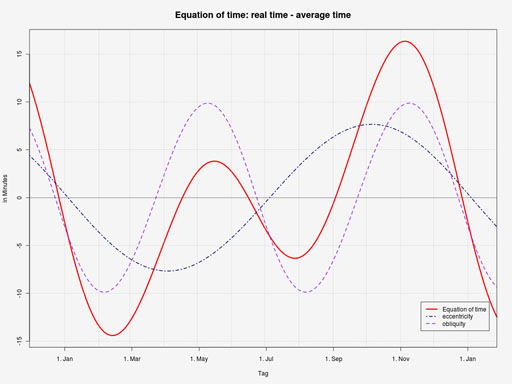 The Wikipedia page for Equation of time includes a link to a lovely piece of R code by Thomas Steiner showing how the two components relate. It's labeled in German, but since the source is included, I was able to add English labels and use it for my article.

But if you look at photos of real analemmas in the sky, they're always tilted. Shouldn't they be vertical? Why are they tilted, and how does the tilt vary with location? To find out, I wanted a program to calculate the analemma.

The alt and az are the altitude and azimuth of the sun right now. They're printed as strings: 25:23:16.6 203:49:35.6 but they're actually type 'ephem.Angle', so float(sun.alt) will give you a number in radians that you can use for calculations.

Of course, you can specify any location, not just major cities. PyEphem doesn't know San Jose, so here's the approximate location of Houge Park where the San Jose Astronomical Association meets:

You can also specify elevation, barometric pressure and other parameters.

So here's a simple analemma, calculating the sun's position at noon on the 15th of each month of 2011:

I used a simple PyGTK window to plot sun.az and sun.alt, so once it was initialized, I drew the points like this:

So now you just need to calculate the sun's position at the same time of day but different dates spread throughout the year.

And my 12-noon analemma came out almost vertical! Maybe the tilt I saw in analemma photos was just a function of taking the photo early in the morning or late in the afternoon? To find out, I calculated the analemma for 7:30am and 4:30pm, and sure enough, those were tilted.

But wait -- notice my noon analemma was almost vertical -- but it wasn't exactly vertical. Why was it skewed at all?

Time is always a problem

As always with astronomy programs, time zones turned out to be the hardest part of the project. I tried to add other locations to my program and immediately ran into a problem.

The ephem.Date class always uses UTC, and has no concept of converting to the observer's timezone. You can convert to the timezone of the person running the program with localtime, but that's not useful when you're trying to plot an analemma at local noon.

At first, I was only calculating analemmas for my own location. So I set time to '20:00', that being the UTC for my local noon. And I got the image at right. It's an analemma, all right, and it's almost vertical. Almost ... but not quite. What was up?

Well, I was calculating for 12 noon clock time -- but clock time isn't the same as mean solar time unless you're right in the middle of your time zone.

You can calculate what your real localtime is (regardless of what politicians say your time zone should be) by using your longitude rather than your official time zone:

Maybe that needs a little explaining. I take the initial time string, like '2011/12/15 12:00', and convert it to an ephem.date. The number of hours I want to adjust is my longitude (in radians) times 12 divided by pi -- that's because if you go pi (180) degrees to the other side of the earth, you'll be 12 hours off. Finally, I have to multiply that by ephem.hour because ... um, because that's the way to add hours in PyEphem and they don't really document the internals of ephem.Date. Set the observer date to this adjusted time before calculating your analemma, and you get the much more vertical figure you see here. This also explains why the morning and evening analemmas weren't symmetrical in the previous run.

This code is location independent, so now I can run my analemma program on a city name, or specify longitude and latitude.

PyEphem turned out to be a great tool for exploring analemmas. But to really understand analemma shapes, I had more exploring to do. I'll write about that, and post my complete analemma program, in the next article.