V is for Video Editing with Shotcut (Shallow Thoughts)

V is for Video Editing with Shotcut

I have a new camera, a Sony a6100. Frustrated with the bugs and limitations of my ancient Rebel XSi, I decided to jump into the world of mirrorless cameras.

So far I'm pleased with it (though sometimes frustrated by its Byzantine menu hierarchy). One of its nice features, which the Rebel didn't have at all, is movies, and I've been shooting a lot of short movies of radio controlled airplanes when we fly at Overlook Park.

That's the problem: a lot of short movies. I'd like to make them available on YouTube so that my fellow pilots can see them; but uploading a movie to YouTube is a low and elaborate process, and uploading eight or so short clips of less than a minute each is just too much work. It would be so much easier if I could edit them together and upload just one movie.

I've done very little video editing. Years ago, I wrote a couple of articles about Kdenlive for the now-defunct Linux Planet. But Kdenlive was fiddly to use, and at the time, had to be built from source since it was still changing so rapidly that the versions available in Linux distro repositories didn't work well.

I hear Kdenlive has improved quite a bit. But it was always overkill for the minimal sort of video editing I need, and when I tried installing it, it had a ton of KDE dependencies I wasn't convinced I wanted to drag in. And it looks like there are a ton of different options now: KdenLive, OpenShot, Cinelerra, Shotcut, Flowblade. Here's a good overview of the various apps: Best Free Video Editing Software for Linux.

My needs are simple. I wanted to be able to take a series of clips, play them one after the other, with simple transitions, like fade in, fade out and dissolve. Of course I want to be able to edit out boring sections. Eventually I'll probably want to add a music track, titles and end credits. Presumably all these are within the capabilities of any video editing program.

Disappointed with OpenShot and Flowblade

Presumably. Figuring it out is another matter. I tried OpenShot first, and making a basic sequence of video clips was child's play, but I never figured out to made fades work. Add a fade, see it in the timeline, preview the video, it doesn't fade. I had the same problem with Flowblade.

Also, OpenShot can't do titles/credits, unless you build from source, because the text handling requires in the version on Ubuntu requires either a long-outdated version of Blender, or an Inkscape method that doesn't work (maybe that's outdated too). You could probably do titles by making an image in GIMP and importing it, but since I couldn't make fades work, it was moot.

But I had noticed that every time I did a web search on OpenShot issues, I kept finding lots of Shotcut tutorials instead. This is mostly a factor of how miserable search engines are at searching for your actual search terms (Google was a little better than DuckDuckGo, but not much); but in this case I took it as a sign that I should try Shotcut. 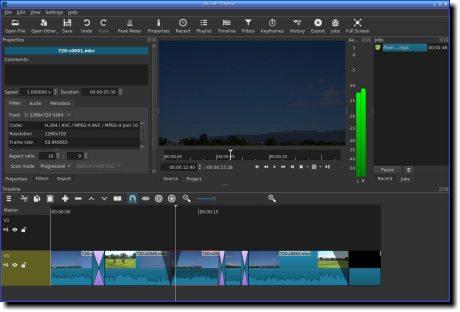 And indeed, Shotcut was much better. Once I figured out where to hover the mouse above the top of the timeline to drag it out big enough to see my clips, it let me add fades and they actually faded. And you can even hover over the corner of the fade in the timeline and drag it to change its length (see this video, Shotcut: How to Fade to Black (Fast Tutorial) for a demo. One thing I've learned is that all documentation for video editors is in video form. If you're the sort of person who learns better by reading text, like me, tough.)

Shotcut's fades were a little less reliable when I tried using two tracks in the timeline. In that case, adding a fade somehow added a transition that made the basic fade no longer work. I'm still not quite sure what happened

On the other hand, if you drag a clip so that it overlaps another clip in the same track, Shotcut automatically creates a dissolve transition of the right length, so that's good. I think the lesson is, if you're a beginner, make sure everything is on the same track in the timeline.

Even better, you can click on that transition, then click the Properties tab to choose from a variety of wipes and other transitions. And yes, a lot of them are hokey. But hokey can be fun too.

There is one thing about Shotcut that drives me batty: I have never seen an app that prints more useless crap to stdout. Every time I switch desktops, before I even move the mouse into the Shotcut window, it spews pages and pages of distracting chatter to the terminal, half of it in reverse video. The Shotcut developers should read that classic Jamie Zawinski article on Linux Video Player Usability, from 2002:

An idiocy that all of these programs have in common is that [ ... ] they also spray a constant spatter of curses crud on the terminal they were started from. I imagine at some point, there was some user who said, ``this program is pretty nice, but you know what it's missing? It's missing a lot of pointless chatter about what plugins and fonts have been loaded!''

Adding basic text is easy in Shotcut, a major advantage over OpenShot. Select the clip over which you want to add the text, click on Filters, click on + (just like to add a fade), search for Text and choose Text: Simple. Then you can set the font, color, size, etc. of text that appears above that video clip.

If you want text on a solid background, instead of over a video clip, use Open Other, then choose either Color or Text. Text is one fewer step, but most people seem to use Color, then add a text effect to it: I think this is because it gives you more flexibility, since you can add other effects to a Color in addition to a text effect, whereas with Text, Shotcut doesn't seem to let me add any other effects. I found this video very helpful: Adding Text and Title Screen.

Positioning Clips on the Timeline

But wait, what if you want to position it so it overlaps with the first video, because you want a transition rather than just a fade?

Shotcut has multi-select: you can click on a clip, then shift-click or control-click on other clips and transitions, then all of those will move together. Except: then it won't create a transition. So if you want a transition, drag the next single clip after the title to where it overlaps with the title (thus creating a transition); then multi-select everything else and drag them to where they butt against the clip you just dragged.

You can also get rid of gaps in the timeline by right-clicking and choosing Remove, which might be easier.

I'm pretty impressed with Shotcut. No video editor is trivial to use, and they all have some silly little UI glitches, but Shotcut made it easy enough to get started, while still having enough flexibility that I'll be able to learn to do what I need.