Not Only Not a State, but Not in North America Either? (Shallow Thoughts)

Not Only Not a State, but Not in North America Either? 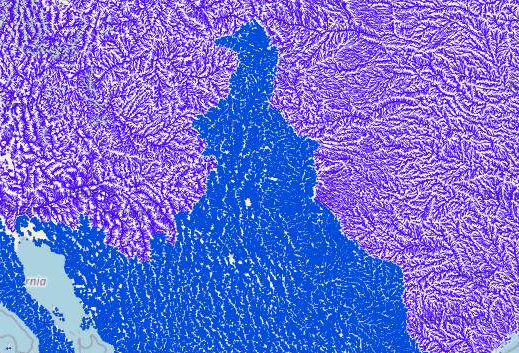 New Mexicans are used to people thinking we're not part of the US.

Every New Mexican has stories, like trying to mail-order something and being told "We don't ship outside the US".

I had a little spare time and decided I'd follow a tutorial that's been on my to-do list for a while: Creating Beautiful River Maps with Python. It combines river watercourse data from gaia.geosci.unc.edu with watershed boundaries from the HydroSheds project using Python and GeoPandas, making a map that is, as promised in the title, beautiful.

I've wanted both river and watershed data for quite some time: maps like OpenStreetMap and OsmAnd tend to de-emphasize all but the most major rivers. So rather than following the tutorial exactly, to create a map of African rivers, I opted for North American data.

I downloaded the indicated datasets, and fiddled with the first parts of the code. The tutorial may be a little out of date, because the datasets available at those sites don't exactly match the data files mentioned in the tutorial, and they don't contain all the tags the tutorial code expects. So to see what was actually in the data, I fired up QGIS and loaded the various shapefiles as layers. 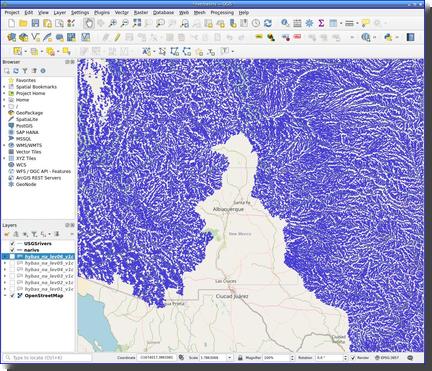 That UNC Gaia river dataset is quite detailed, and the collections of watersheds available at HydroSheds are also pretty wonderful. One thing I was curious about right off the bat: south of Santa Fe is an area called the "Galisteo Basin", but it seems like the Galisteo River flows westward out of the supposed "basin" — you cross it when you drive the freeway between Albuquerque and Santa Fe. Is it a basin or not? What would the data show? I zoomed in toward New Mexico ...

... and discovered that most of New Mexico, and the entire Rio Grande watershed, is missing from the river data!

Somehow I'd had the impression I lived in North America. Shows what I know! 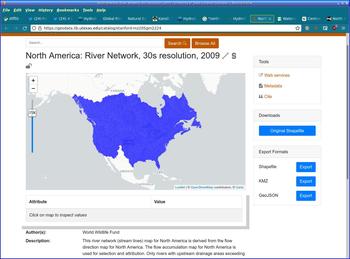 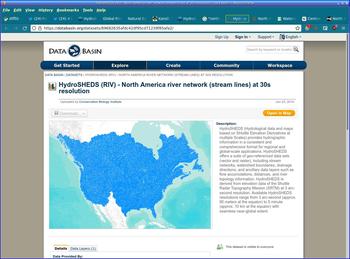 At the USGS I found a nice NA Lakes and Rivers shapefile that includes New Mexico, but it only shows major rivers: the Rio Grande, yes, but not the Jemez, the Santa Fe or the Pojoaque, let alone the Frijoles. Nothing like the detail of the UNC data. But none of the more detailed North American datasets included the Rio Grande.

At first I speculated that whoever set up these datasets decided to define a "North American river" as one that is entirely in the US or Canada, never touching any other country — even as a border, like the Rio Grande does as it flows between Texas and Mexico. Except — no, that can't be it, because the Colorado River passes into Mexico before it flows into the Gulf of California, yet the entire Colorado River watershed is shown in all these datasets. So much for that theory!

(I also have a sneaking suspicion that these are all just unattributed copies of the same dataset, rather than lots of people independently making this same weird decision to omit New Mexico from North America. Another case of what Stephen Jay Gould called a fox terrier.)

Also, if they were basing the decision on the river touching Mexico (setting aside the question about the Colorado), isn't (old) Mexico also North America? When I was in grade school, we were always taught that North America included Mexico, and Central America started with Guatemala.

But I guess I'm just showing my age (or, perhaps, the quality of California public schools). According to Wikipedia, these days Mexico is considered part of Central America, and not part of North America, at least if you're in the US, or using the official UN definition. It's only part of North America if you're in a Spanish or Portuguese speaking American country. Though ironically, the country_shapefiles used by the tutorial (from naturalearthdata.com) has North America going all the way down to Panama, even though their Lakes + Reservoirs North America Supplement dataset omits almost all New Mexican lakes.

Okay, so at least I got corrected on that point. I still have no idea why all these datasets omit the Rio Grande from North America. But I went back to UNC Gaia and downloaded the file for Central American rivers, a nice small dataset compared to the North American one. It works fine, so now I have all the rivers I need. (Though, annoyingly, the NA and CA datasets have a completely different set of columns, so I'll have to figure out how to map one column set to the other.)

Oh, and in case you're wondering: Galisteo is not really a basin.