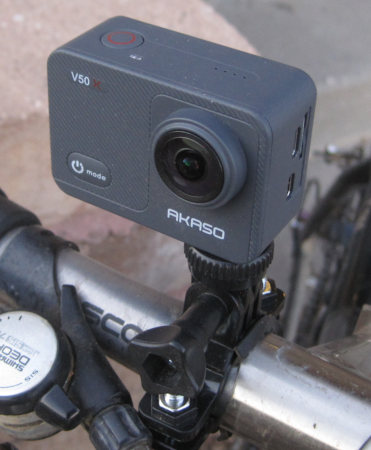 Last week I ordered an Akaso V50x. Everybody seems to agree that Akaso offers the best bang-for-the-buck, but choosing among Akaso's large and varied collection of models isn't easy, especially since there aren't many comparisons between the V50 line and the Brave line. The V50x was well-liked by most reviewers, and gets high praise for its digital stabilization ("6-axis", which apparently means three axes of translation plus three gyro-driven rotation axes).

I worried, though, that all the sample V50X videos I found on YouTube were severely underexposed, and I had written it off my list until I stumbled upon a review that listed all the V50x Settings options and I learned it offers exposure compensation (which it calls "Exposure value").

In the few days I've had the Akaso I've been fairly impressed. The stabilization is indeed very good — if anything, it's almost too good, and with both stabilization and gyro enabled, it smooths out the rocky technical trail sections so you can't see how much I was bouncing around. With Exposure value set at +0.5, the exposures and color are just fine for both sunny and shady sections of trail. Moving textures, like a sandy trail surface, are sometimes blocky and blurred, but that happens on all the action cam videos I've seen, even from the expensive GoPros. (I think this is what they call "texture shimmering" and it may be an artifact of the video format used, but I haven't found a good reference to confirm that). 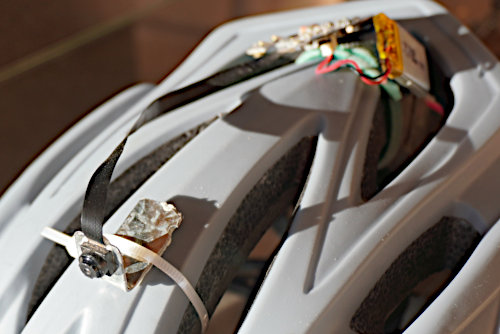 Actually, before I ordered the Akaso, I tried another experiment. I had a tiny, cheap Mate 808 camera that I ordered on eBay several years back hoping to use it on radio-controlled planes. It's available from ebay sellers in a little keychain-sized case, or as separate pieces without the case: mine has separate camera unit, circuit board and battery with a long cable, offering a lot of flexibility in mounting.

The Mate 808 had proven inadequate for powered R/C planes: it has no stabilization at all, and the vibration from even a small electric motor is enough to ruin the video. (Some day I'll get around to trying it on a glider.) I assumed a mountain bike handlebar mount would be just as bad, but it was easy to rig up a helmet mount. However, even on a helmet mount the results were too bouncy and definitely needed stabilization.

I've used shotcut off and on for my limited video editing needs, and it turned out to be easy to accomplish side-by-side videos in shotcut. The hardest part was finding an interesting trail segment that had been recorded on both cameras: the Mate808 occasionally switches itself off for no obvious reason, so it didn't record the whole ride; the Akaso doesn't do that, but sometimes I switched it off while we were stopped and then failed to verify it was recording again when we got going.

The steps, in Shotcut:

Here's the final video: Camera Comparison: Mate808 vs V50x for Mountain Biking. And I don't intend this as a dig at the Mate808. Keep in mind that it's a third the price of the V50X, and less than a quarter of the weight (15 grams vs 69). It's actually surprisingly good, for what it is. But the Akaso is definitely the winner for a mountain bike camera.