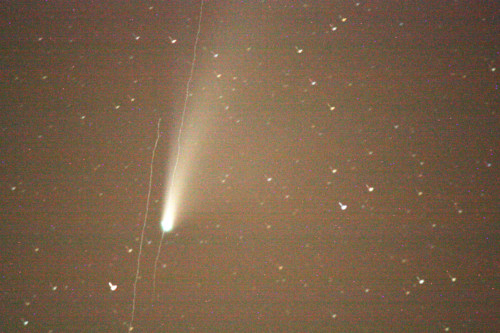 The interesting thing about Monday besides just getting to see the comet was the never-ending train of satellites. I've been reading plenty of articles about Starlink, but there's no predictor for them, no easy way to answer the question, "Was that Starlink I just saw?" Everybody talks about Heavens Above, but their predictor only predicts one launch at a time, so you'd have to run it nine times every time you wanted a prediction. But I haven't found anything better. Makes me want to write my own, if I could figure out where to get the orbital elements for all those satellites.

So I have no way to check it, but I have to assume what I saw Monday night were Starlink; what else would they be? They just kept coming and coming. I lost count but I think there were more than thirty in all.

For my own photos, all I have to show are quickie contrast boosts with GIMP's Curves tool. I was hoping S was going to be for Stacking with Siril, an open source astronomical image processing program; but so far the image alignments I've gotten with Siril have been pretty bad. Presumably it's operator error. I'm getting better results with the Python module astroalign, but it's going to take a while to write a full solution that aligns and stacks. So it's GIMP for now.

Why are the satellite trails so wavy in the photos? It was a windy night, and the camera was on a fairly lightweight iOptron mount that was being blown and shaken around by the wind. It wasn't a great night for astrophotography.

For a much more impressive example of Starlink interfering with Comet Neowise, check out this composite photo from the Canary Islands on Tuesday night: SpaceX Satellites Ruin Perfectly Good View of Comet NEOWISE.

Anyway, I'm impressed with the sheer number of Starlink satellites. I certainly see now what all the fuss is about!