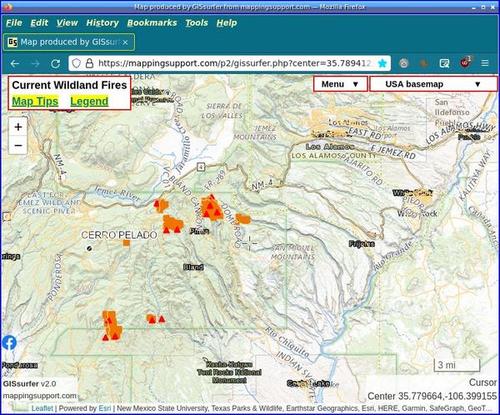 I've been using the Wildland Fires map from MappingSupport.com to keep an eye on the Cerro Pelado fire and the larger (though more distant from me) Hermit's Peak/Calf Canyon fires raging in the Pecos.

It's an excellent map, but it's a little sporadic in whether it shows the fire perimeter. In any case, as a data junkie, I wanted to know how to get the data and make my own display, maybe for a quick viewer that I can pop up when I sign on in the morning.

Also, Los Alamos County, on its Cerro Pelado Information page, has a map showing the "Go" lines (if the fire crosses these lines, we have to evacuate) for Los Alamos and White Rock and I'd like to be able to view those lines on the same map with the fire perimeter and hot spots. (Los Alamos only makes them available in some kind of weird PDF that only displays in Adobe's online PDF reader, not a GIS format, but zooming in on the PDF, I drew the lines as tracks in PyTopo and saved as GPX.)

With a little searching, I found links to download MODIS and VIIRS data on the NASA FIRMS Active Fire Data page. I downloaded the 24h data. The page talks about registering an account, but at least for now, you can download the URLs on that page directly without needing to log in.

There are two different sets of VIIRS data, which come from two different satellites in the Visible Infrared Imaging Radiometer Suite. The datasets are quite similar but not identical: each one sees a few hot spots that the other misses.

You can download data in KML, ESRI Shapefiles (no thank you), and "text". The text format turns out to be a CSV, and since each datafile covers the entire US and I wanted to narrow it down to a smaller area, I decided the CSV sounded easier to handle than KML (and almost anything is easier than shapefiles).

Sure enough, it was easy as pie to download MODIS and VIIRS CSV files, filter them to show only local data, and rewrite them as waypoints in a GPX file.

Fire Perimeter Data from the NIFC

For the NIFC data, I found my way to a page for the National Interagency Fire Center API Explorer. It has a morass of possible arguments (what do you suppose irwin_GACC is? It sounds like the sound Irwin makes after trying to swallow something unpleasant) and the documentation link just leads to what seems to be a general page on ArgGIS services, not documentation on the NIFC arguments. So I just left all the fields checked. Their boundary-setting page doesn't actually let you draw boundaries, just set a zoom level, so I gave up on that and used PyTopo to find coordinate boundaries for New Mexico. I ended up with this surprisingly short query.

The data is JSON — but it's not GeoJSON, rather an obscure format called "ESRI JSON". Fortunately GDAL can handle that: 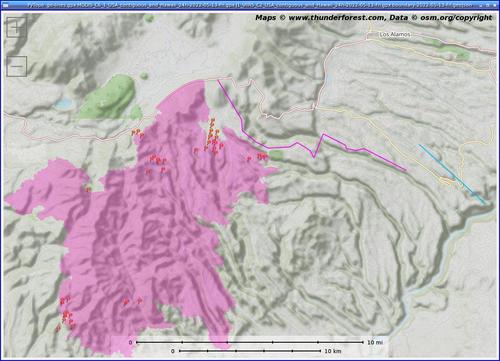 That gave me JSON that works in a GIS program, such as QGIS. But it turned out PyTopo couldn't handle it: the file defins its shapes with the MultiPolygon tag, which I'd never seen in a real-world file before. So, after a little hacking, PyTopo now handles MultiPolygon.

And now I can run my little firedata.py script, and it fetches all the new data and prints the pytopo line with all the right data file arguments. The red pins are hot spots, the light magenta area is the latest fire perimeter. The magenta line is the Los Alamos "Go" line, and light blue is White Rock.

Oh, and about those Go lines? Turns out they're bunk anyway. The fire actually crossed one of the earlier "Go" lines but the fire crews were able to beat it back, and no one evacuated. It's better to make decisions based on what the experts on the ground say, not whether the fire crosses an arbitrary line on a map. 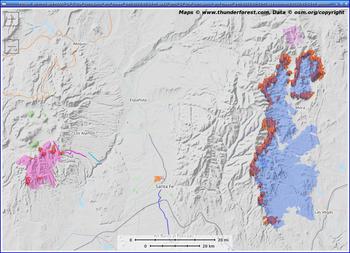 It's cooler today, and less windy, and the firefighters may be able to make progress on both fires. That's steep, rugged terrain out in the Bandelier backcountry where they're fighting, and in the hot, windy conditions that prevailed most of this week, it must have been hell out there. Inciweb reports that there are 976 people fighting Cerro Pelado now, plus 1,832 on Hermit's Peak A big THANK YOU to every one of them. Stay safe!