For the last several months, I repeatedly find myself in a mode where my terminal isn't working quite right. In particular, Ctrl-C doesn't work to interrupt a running program. It's always in a terminal where I've been doing web work. The site I'm working on sadly has only ftp access, so I've been using ncftp to upload files to the site, and git and meld to do local version control on the copy of the site I keep on my local machine. I was pretty sure the problem was coming from either git, meld, or ncftp, but I couldn't reproduce it.

The first step was to find out which of the three programs was at fault. Most of the time when this happened, I wouldn't notice until hours later, the next time I needed to stop a program with Ctrl-C. I speculated that there was probably some way to make zsh run a check after every command ... if I could just figure out what to check.

Terminal modes and stty -a

It seemed like my terminal was getting put into raw mode. In programming lingo, a terminal is in raw mode when characters from it are processed one at a time, and special characters like Ctrl-C, which would normally interrupt whatever program is running, are just passed like any other character.

You can list your terminal modes with stty -a:

But that's a lot of information. Unfortunately there's no single flag for raw mode; it's a collection of a lot of flags. I checked the interrupt character: yep, intr = ^C, just like it should be. So what was the problem?

and that would fix the problem. But it didn't. Ctrl-C still didn't work.

Setting a trap, with precmd

However, knowing some things that differed did give me something to test for in the shell, so I could test after every command and find out exactly when this happened. In zsh, you do that by defining a precmd function, so here's what I did:

Pardon all the exclams. I wanted to make sure I saw the notice when it happened.

And this fairly quickly found the problem: it happened when I suspended ncftp with Ctrl-Z.

Okay, now I knew the culprit, and that if I switched to a different ftp client the problem would probably go away. But I still wanted to know why my stty command didn't work, and what the actual terminal difference was.

Somewhere in my web searching I'd stumbled upon some pages suggesting stty sane as an alternative to reset. I tried it, and it worked.

According to man stty, stty sane is equivalent to

Eek! But actually that's helpful. All I had to do was get a bad terminal (easy now that I knew ncftp was the culprit), then try:

... and so on, trying Ctrl-C each time to see if things were back to normal. Or I could speed up the process by grouping them: ... and so forth. Which is what I did. And that quickly narrowed it down to isig. I ran reset, then ncftp again to get the terminal in "bad" mode, and tried: and sure enough, that was the difference.

I'm still not sure why meld didn't show me the isig difference. But if nothing else, I learned a bit about debugging stty settings, and about stty sane, which is a much nicer way of resetting the terminal than reset since it doesn't clear the screen.

One of them Los Alamos liberals I love this Adopt-a-Highway sign on Highway 4 on the way back down from the Jemez.

I have no idea who it is (I hope to find out, some day), but it gives me a laugh every time I see it. 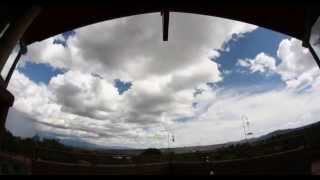 A few weeks ago I wrote about building a simple Arduino-driven camera intervalometer to take repeat photos with my DSLR. I'd been entertained by watching the clouds build and gather and dissipate again while I stepped through all the false positives in my crittercam, and I wanted to try capturing them intentionally so I could make cloud movies.

Of course, you don't have to build an Arduino device. A search for timer remote control or intervalometer will find lots of good options around $20-30. I bought one so I'll have a nice LCD interface rather than having to program an Arduino every time I want to make movies.

Okay, so you've set up your camera on a tripod with the intervalometer hooked to it. (Depending on how long your movie is, you may also want an external power supply for your camera.)

Now think about what size images you want. If you're targeting YouTube, you probably want to use one of YouTube's preferred settings, bitrates and resolutions, perhaps 1280x720 or 1920x1080. But you may have some other reason to shoot at higher resolution: perhaps you want to use some of the still images as well as making video.

For my first test, I shot at the full resolution of the camera. So I had a directory full of big ten-megapixel photos with filenames ranging from img_6624.jpg to img_6715.jpg. I copied these into a new directory, so I didn't overwrite the originals. You can use ImageMagick's mogrify to scale them all:

I had an additional issue, though: rain was threatening and I didn't want to leave my camera at risk of getting wet while I went dinner shopping, so I moved the camera back under the patio roof. But with my fisheye lens, that meant I had a lot of extra house showing and I wanted to crop that off. I used GIMP on one image to determine the x, y, width and height for the crop rectangle I wanted. You can even crop to a different aspect ratio from your target, and then fill the extra space with black:

If you decide to rescale your images to an unusual size, make sure both dimensions are even, otherwise avconv will complain that they're not divisible by two.

I found lots of pages explaining how to stitch together time-lapse movies using mencoder, and a few using ffmpeg. Unfortunately, in Debian, both are deprecated. Mplayer has been removed entirely. The ffmpeg-vs-avconv issue is apparently a big political war, and I have no position on the matter, except that Debian has come down strongly on the side of avconv and I get tired of getting nagged at every time I run a program. So I needed to figure out how to use avconv.

I found some pages on avconv, but most of them didn't actually work. Here's what worked for me:

Adjust the start_number and filename appropriately for the files you have.

Avconv produces an mp4 file suitable for uploading to youtube. So here is my little test movie: Time Lapse Clouds. We're having a huge bloom of a lovely flower called pale trumpets (Ipomopsis longiflora), and it turns out that sphinx moths just love them.

The white-lined sphinx moth (Hyles lineata) is a moth the size of a hummingbird, and it behaves like a hummingbird, too. It flies during the day, hovering from flower to flower to suck nectar, being far too heavy to land on flowers like butterflies do. I've seen them before, on hikes, but only gotten blurry shots with my pocket camera. But with the pale trumpets blooming, the sphinx moths come right at sunset and feed until near dark. That gives a good excuse to play with the DSLR, telephoto lens and flash ... and I still haven't gotten a really sharp photo, but I'm making progress.

Check out that huge eye! I guess you need good vision in order to make your living poking a long wiggly proboscis into long skinny flowers while laboriously hovering in midair.

I got an envelope from my bank in the mail. The envelope was open and looked like the flap had never been sealed.