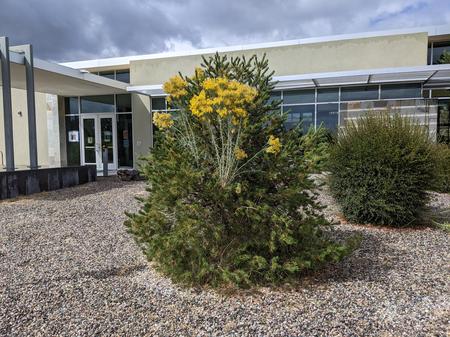 Saw this outside the White Rock library. It's not every day you get to see a piñon tree in bloom!

(Okay, so it's actually a chamisa growing under the piñon.) 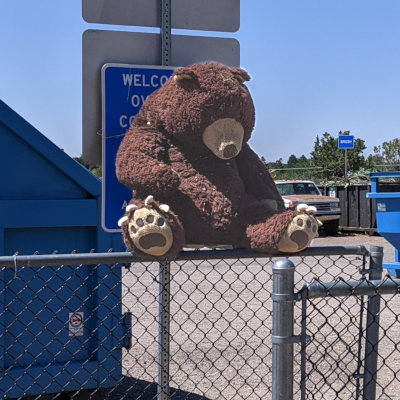 Bears have been in our local news lately -- along with anti-bear measures.

A few weeks ago, the County Council voted to invest a sizable chunk of money in bear-proof garbage roll carts for every home in the county.

While this is probably a good idea up in Los Alamos, down here in White Rock it's silly. We almost never see bears here. But apparently people on the hill don't believe that, or are convinced that if Los Alamos residents all have secure roll carts, the bears will migrate down the hill to White Rock and start becoming a nuisance here. (Really! -- that was the argument for buying roll carts for White Rock too.)

Anyway, I've scoffed at this ... until yesterday. I was at Overlook Park at the weekly R/C flying get-together, and as I was packing up to leave, carrying planes back to the car, I saw a bear! It was sitting on the fence at the Collection Center (that's the current euphemism for what they used to call a dump), just chilling out. Didn't seem scared of me at all.

I was able to snap a quick photo and still escape with my life. Whew.

Maybe we do need those roll carts. Every time the media invents a new moon term -- super blood black wolf moon, or whatever -- I roll my eyes. First, this ridiculous "supermoon" thing is basically undetectable to the human eye. Here's an image showing the relative sizes of the absolute closest and farthest moons. It's easy enough to tell when you see the biggest and smallest moons side by side, but when it's half a degree in the sky, there's no way you'd notice that one was bigger or smaller than average.

Even better, here's a link to an animation of how the moon changes size and "librates" -- tilts so that we can see a little bit over onto the moon's far side -- during the course of a month.

Anyway, the media seem to lap this stuff up and every month there's a new stupid moon term. I'm sure nearly every astronomer was relieved to see the thoroughly sensible Gizmodo article yesterday, Oh My God Stop It With the Fake Moon Names What the Hell Is a 'Black Moon' That Isn't Anything. Not that that will stop the insanity.

And then, talking about the ridiculous moon name phenom with some friends, I realized I could play this game too. So I spent twenty minutes whipping up my own Silly Moon Name Generator.

It's super simple -- it just uses Linux' built-in dictionary, with no sense of which words are common, or adjectives or nouns or what. Of course it would be funnier with a hand-picked set of words, but there's a limit to how much time I want to waste on this.

You can add a parameter ?nwords=5 (or whatever number) if you want more or fewer words than four.

How Does It Work?

Random phrase generators like this are a great project for someone just getting started with Python. Python is so good at string manipulation that it makes this sort of thing easy: it only takes half a page of code to do something fun. So it's a great beginner project that most people would probably find more rewarding than cranking out Fibonacci numbers (assuming you're not a Fibonacci geek like I am). For more advanced programmers, random phrase generation can still be a fun and educational project -- skip to the end of this article for ideas.

For the basics, this is all you need: I've added comments explaining the code.

In that code example, I expanded everything to try to make it clear for beginning programmers. In practice, Python lets you be a lot more terse, so the way I actually wrote it was more like:

There are three important differences (in bold):

Opening a file using "with" ensures the file will be closed properly when you're done with it. That's not important in this tiny example, but it's a good habit to get into.

I specify the 'utf-8' encoding when I open the file because when I ran it as a web app, it turned out the web server used the ASCII encoding and I got Python errors because there are accented characters in the dictionary somewhere. That's one of those Python annoyances you get used to when going beyond the beginner level.

The way I define words all in one line (well, it's conceptually one long line, though I split it into two so each line stays under 72 characters) is called a list comprehension. It's a nice compact alternative to defining an empty list [] and then calling append() a bunch of times, like I did in the first example.

Initially they might seem harder to read, but list comprehensions can actually make code clearer once you get used to them.

Finally, to make it work as a web page, I added the CGI module. That isn't really a beginner thing so I won't paste it here, but you can see the CGI version at hypermoon.py on GitHub.

I should mention that there's some debate over CGI in Python. The movers and shakers in the Python community don't approve of CGI, and there's a plan to remove it from upcoming Python versions. The alternative is to use technologies like Flask or Django. while I'm a fan of Flask and have used it for several projects, it's way overkill for something like this, mostly because of all the special web server configuration it requires (and Django is far more heavyweight than Flask). In any case, be aware that the CGI module may be removed from Python's standard library in the near future. With any luck, python-cgi will still be available via pip install or as Linux distro packages.

I mentioned earlier that I thought the app would be a lot funnier with a handpicked set of words. I did that long, long ago with my Star Party Observing Report Generator (written in Perl; I hadn't yet started using Python back in 2001). That's easy and fun if you have the time to spare, or a lot of friends contributing.

You could instead use words taken from a set of input documents. For instance, only use words that appear in Shakespeare's plays, or in company mission statements, or in Wikipedia articles about dog breeds (this involves some web scraping, but Python is good at that too; I like BeautifulSoup).

Or you could let users contribute their own ideas for good words to use, storing the user suggestions in a database.

Another way to make the words seem more appropriate and less random might be to use one of the many natural language packages for Python, such as NLTK, the Natural Language Toolkit. That way, you could control how often you used adjectives vs. nouns, and avoid using verbs or articles at all.

Random word generators seem like a silly and trivial programming exercise -- because they are! But they're also a fun starting point for more advanced explorations with Python. I had to mail a package recently, and finished up a roll of packing tape.

I hadn't realized before I removed the tape roll from its built-in dispenser that packing tape was dispensed by rabbits.

Dave was reading New Mexico laws regarding a voter guide issue we're researching, and he came across this gem in Section 29-1-14 G of the "Law Enforcement: Peace Officers in General: Unclaimed Property" laws:

Any alcoholic beverage that has been unclaimed by the true owner, is no longer necessary for use in obtaining a conviction, is not needed for any other public purpose and has been in the possession of a state, county or municipal law enforcement agency for more than ninety days may be destroyed or may be utilized by the scientific laboratory division of the department of health for educational or scientific purposes.

We can't decide which part is more fun: contemplating what the "other public purposes" might be, or musing on the various "educational or scientific purposes" one might come up with for a month-old beverage that's been sitting in the storage locker ... I'm envisioning a room surrounded by locked chain-link containing dusty shelves containing rows of half-full martini and highball glasses. This sign, in Santa Fe, always makes me do a double-take.

Would you go to a dentist or eye doctor named "Adventure Dental"?

Personally, I prefer that my dental and vision visits are as un-adventurous as possible.

On a hike a few weeks ago, we encountered an unusual, and amusing, stile across the trail.

It isn't uncommon to see stiles along trails. There are lots of different designs, but their purpose is to allow humans, on foot, an easy way to cross a fence, while making it difficult for vehicles and livestock like cattle to pass through. A common design looks like this, with a break in the fence and "wings" so that anything small enough to make the sharp turn can pass through.

On a recent hike starting near Buckman, on the Rio Grande, we passed a few stiles with the "wings" design; but one of the stiles we came to had a rather less common design: It was set up so that nothing could pass without climbing over the fence -- and one of the posts which was supposed to hold fence rails was just sitting by itself, with nothing attached to it.

I suspect someone gave a diagram to a welder, and the welder, not being an outdoor person and having no idea of the purpose of a stile, welded it up without giving it much thought. Not very functional ... and not very stilish, either!

I'm curious whether the error was in the spec, or in the welder's interpretation of it. But alas, I suspect I'll never learn the story behind the stile.

Giggling, we climbed over the fence and proceeded on our hike up to the very scenic Otowi Peak.