Time-Lapse Video of Pyrocumulus from the Hermit's Peak Fire

The Cerro Pelado fire that was threatening Los Alamos is mostly under control now (71% contained as of Tuesday morning), and the county has relaxed the "prepare to evacuate" status.

That's good, and not just for Los Alamos, because it means more people who can fight the much larger Hermit's Peak/Calf Canyon fire, currently 26% contained and stretching over a huge 299,565 acres.

For those of us on the Pajarito Plateau, that means we're getting views of enormous pyrocumulus clouds towering over the Sangre de Cristo mountains from Las Vegas to just south of Taos.

I keep missing the opportunity for photos, but on Sunday night I took a series of images and made this time-lapse movie.

It's the windy season, and the winds are crazy here. I'm pretty sure I saw a house, some flying monkeys and a woman on a bicycle fly past the window twenty minutes ago.

I'm not sure precisely how crazy — our weather station is only showing a max of 18 mph, which mostly means there are too many trees around it, but the weather station at TA54 just up the road is reading 26 right now, with a max of 48.3.

The cage that I built this spring to keep the deer away from the apple tree (not that it ever flowers or fruits anyway) keeps wanting to slide into the tree or topple over on top of it. I had to jump up twice during dinner and run out to rescue it. So now it's tied to some big rocks and, if those lose their grip, it's also tied to the fence. 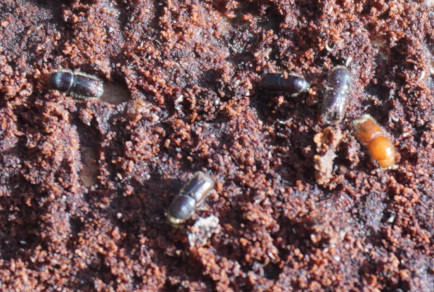 Sometimes it seems like yellow is the color of fall.

First, in late summer, a wide variety of sunflower appear: at the house we get mostly the ones with the uninspiring name of cowpen daisy (Verbesina encelioides). The flower is much prettier than its name would suggest. 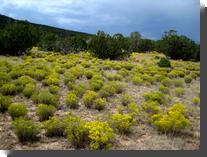 Then the snakeweed (Gutierrezia sarothrae) and chamisa (Ericameria nauseosa) take over, with their carpets of tiny yellow flowers. (More unfortunate names. Chamisa has a mildly unpleasant smell when it's blooming, which presumably explains its unfortunate scientific name; I don't know why snakeweed is called that.) The first order of business was to get him off the path so he wouldn't get stepped on. * 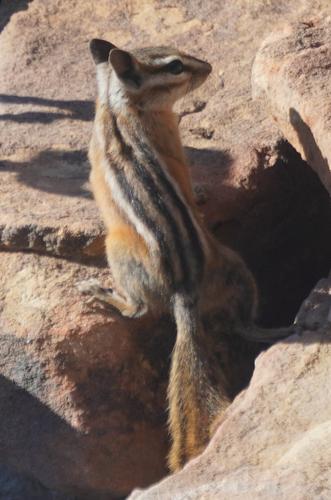 They keep telling us what a serious housing problem Los Alamos county has. Especially low-income housing.

Well, I just saw it for myself, from the landlord's perspective. I was awakened at six this morning by two tenants squabbling over a low-rent apartment.

It started when one of the ash-throated flycatchers, who just arrived this week, landed on the railing outside the bedroom, making its typical chip-chip-churrup call. But then it changed to a different call, one I'd never heard before, a low and insistent repetitive trill.

But the nest box on that deck was already occupied by a pair of mountain chickadees. The chickadees have been there more than a week and are clearly not interested in vacating, even for a flycatcher twice their size. They made their kissy-noise chickadee call right back at the flycatcher, and the flycatcher eventually gave up and flew away.

Fortunately, unlike the county's problem, this one is relatively easily solved. There's another nest box, which I think is still unoccupied this year, just below the garden fence.

I guess, like the county, I should consider adding more subsidized housing. I could have sworn I bought a third nest box when I bought those two, and never got around to putting it up, But I can't find it now. I guess it's time to buy or make another nest box or two.

It's a nice problem to have. When I first bought these birdhouses, I didn't really expect I'd get any takers. But in the six years I've had them, they've hosted at least one nest each year, sometimes two or three. in addition to ash-throated flycatchers and mountain chickadees, they've also Bewick's wrens also use them.

Although they're sold as bluebird boxes, I've never had a bluebird use them; bluebirds fly over and sometimes stop for a drink, but they don't hang around or breed. I know there are skillions of bluebirds over in Pajarito Acres, only a few miles away, but I'm not sure how to entice them to hang out here. They're bug eaters and not interested in seed. A few voices on the 'net suggest that commercial bluebird boxes are designed for eastern bluebirds, and western bluebird boxes should have a slightly larger hole. So far I've been too lazy to do anything about that, but I do have woodworking tools, including a set of hole saws and Forstner bits. Maybe I'll put that on the to-do list for this week. Meanwhile, I'll enjoy the chickadees and flycatchers.

One memorable sequence from Sir David Attenborough's stellar Life of Birds documentary is that of a black egret (or black heron -- I've seen both, but aside from color it looks remarkably like the North American snowy and reddish egrets), "umbrella fishing". I never thought I'd have a chance to see that in person. But it turns out black herons aren't the only birds to do that. This winter, we saw a grey-headed junco doing essentially the same thing in our back yard!

This little junco performed its umbrella trick almost like the black heron from Life of Birds, though it didn't hide its head underneath. Still, it might some day: it was still perfecting its technique as we watched over the course of a couple of weeks.