Administrivia: I've switched over to using static files with pyblosxom, instead of generating everything from a CGI, to save some load on the server.

The best top level URL to use is http://shallowsky.com/blog/

I've hacked up a python CGI script that will try to remap the URLs appropriately, so old feeds will continue to work for a while. But it probably isn't very robust, and I'd like to get rid of the script eventually, so please update any bookmarks you might have to this blog.

I just got back from the local Safeway, where a one-pound box of sugar cubes costs $1.49.

Even better, the two-pound price is up: it used to be $3.49 a few months ago (no change in the one-pound price).

I guess too many people were jumping on that incredible $3.49 deal, so they had to raise it.

I got slashdotted yesterday -- a positive Slashdot book review of Beginning GIMP. Hooray!

The comments were mostly the usual mix of flames from Photoshop users saying "GIMP sucks because it isn't like Photoshop", with hardly anything about the book; no surprise there. I don't know why Photoshop users seem so compelled to attack the GIMP, but obviously they do since this happens so often. They don't seem to be willing to accept "Some people like one style of user interface, other people like another style, and a highly complex application like GIMP or Photoshop is going to take some time to learn no matter how it's designed."

Slashdot linked to Barnes & Noble rather than Amazon, which is understandable since BN has a killer 40% off sale in progress on Apress books (they have

Apress also pointed me toward a couple other reviews that I hadn't seen yet, so I created a review page to link to them.

An unexplained change in the screen blanking timeout sent me down the primrose path of learning about dpms, vbetool and screen blanking. I guess it had to happen eventually.

It started when my laptop, which normally can sit for about ten minutes before the screen goes black, suddenly started blanking the screen after only two minutes.

After a few days of sporadic research, I now know what pieces are involved and how to fix the timeout. But it turns out not everything works the way it's supposed to. I've written up my findings: A Primer on Screen Blanking Under Xorg.

On my wall I have a calendar with pretty pictures of wolves, and assorted wolf facts for each month. July features a wolf howling. In the lists of facts is:

I wonder why wolves are so much more precise when they're howling in metric?

I put a "baby carrot" out on the door ledge to see if the squirrels might like it. (In summer, we're not getting many squirrel visits. There must be something pretty yummy growing in the neighborhood. Notch comes by every second or third day, eats a few pieces of walnut then waits expectantly for take-up (a whole walnut she can take away and bury). A male youngster we suspect is Notch's also comes by every day or two, to eat a few nuts and drink water. We haven't seen Nonotchka for months, and I fear the worst.)

Turns out squirrels have zero interest in carrots. We put the carrotlet into the nut dish and forgot about it for a few days, and discovered something interesting: carrot raisins! 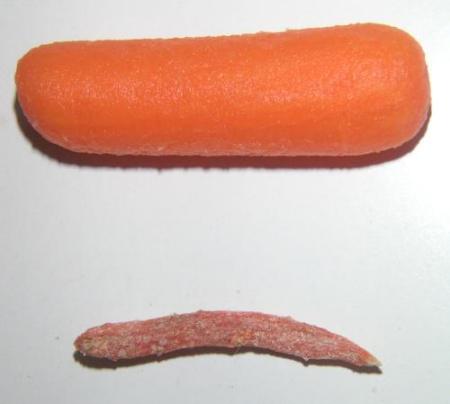 Turns out carrots are mostly water, and they shrink even more than grapes when you let them dry out.

I'm going to let it dry out some more and see what happens. I'm hoping for fame and fortune as the first person to create carrot nanotubes.

Anyone following the voting machine controversy in the last presidential election -- or, even more, anyone who wasn't following it and might not be aware of the issues -- should check out Robert F. Kennedy, Jr's article in Rolling Stone, Was the 2004 Election Stolen?

The article is long, detailed and well researched article, and it will make you question whether we really live in a democracy.

Apparently Kennedy is considering filing whistleblower lawsuits against two of the voting machine companies. This won't do anything to change our national elections, but at least it might help get the word -- and the evidence -- out into the public eye.